A Jewel in PNG Sons crown

A jewel in PNG Sons crown

With vision, precision and leadership, PNG Sons says that its growth story has been a shining example in the industry.

P N Gadgil & Sons Ltd (known as PNG Sons) is a leading jewellery brand with a legacy going back to more than 186 years. The company came into existence in 2012 when the erstwhile P N Gadgil & Co split. PNG Sons is headed by Ajit alias Govind Gadgil and Dr Renu Gadgil, with a professional management headed by CEO-Director Amit Modak. 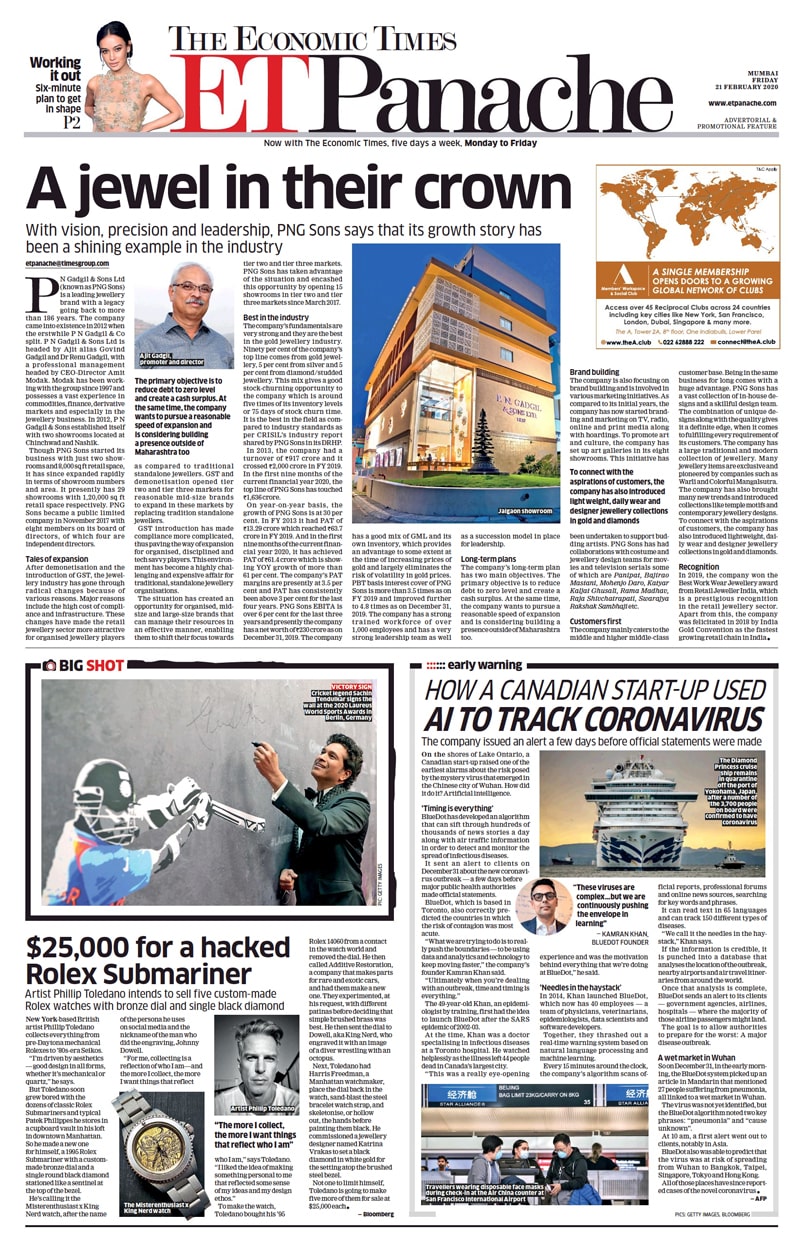 Modak has been working with the group since 1997 and possesses a vast experience in commodities, finance, derivative markets and especially in the jewellery business. In 2012, PNG Sons established itself with two showrooms located at Chinchwad and Nashik.

Though PNG Sons started its business with just two showrooms and 8,000 sq ft retail space, it has since expanded rapidly in terms of showroom numbers and area. It presently has 29 showrooms with 1,20,000 sq ft retail space respectively. PNG Sons became a public limited company in November 2017 with eight members on its board of directors, of which four are independent directors.

After demonetisation and the introduction of GST, the jewellery industry has gone through radical changes because of various reasons. Major reasons include the high cost of compliance and infrastructure. These changes have made the retail jewellery sector more attractive for organised jewellery players as compared to traditional standalone jewellers. GST and demonetisation opened tier two and tier three markets for reasonable mid-size brands to expand in these markets by replacing tradition standalone jewellers. GST introduction has made compliance more complicated, thus paving the way of expansion for organised, disciplined and tech savvy players. This environment has become a highly challenging and expensive affair for traditional, standalone jewellery organisations. The situation has created an opportunity for organised, midsize and large-size brands that can manage their resources in an effective manner, enabling them to shift their focus towards tier two and tier three markets. PNG Sons has taken advantage of the situation and encashed this opportunity by opening 15 showrooms in tier two and tier three markets since March 2017.

Best in the industry

The company’s fundamentals are very strong and they are the best in the gold jewellery industry. Ninety per cent of the company’s top line comes from gold jewellery, 5 per cent from silver and 5 per cent from diamond/studded jewellery. This mix gives a good stock-churning opportunity to the company which is around five times of its inventory levels or 75 days of stock churn time. It is the best in the field as compared to industry standards as per CRISlL’s industry report shared by PNG Sons in its DRHP. In 2013, the company had a turnover of ₹917 crore and it crossed ₹2,000 crore in FY 2019. In the first nine months of the current financial year 2020, the top line of PNG Sons has touched ₹1,636 crore. On year-on-year basis, the growth of PNG Sons is at 30 per cent. In FY 2013 it had PAT of ₹13.29 crore which reached ₹63.7 crore in FY 2019. And in the first nine months of the current financial year 2020, it has achieved PAT of ₹61.4 crore which is showing YOY growth of more than 61 per cent. The company’s PAT margins are presently at 3.5 per cent and PAT has consistently been above 3 per cent for the last four years. PNG Sons EBITA is over 6 per cent for the last three years and presently the company has a net worth of ₹230 crore as on December 31, 2019. The company has a good mix of GML and its own inventory, which provides an advantage to some extent at the time of increasing prices of gold and largely eliminates the risk of volatility in gold prices. PBT basis interest cover of PNG Sons is more than 3.5 times as on FY 2019 and improved further to 4.8 times as on December 31, 2019. The company has a strong trained workforce of over 1,000 employees and has a very strong leadership team as well as a succession model in place for leadership.

The company’s long-term plan has two main objectives. The primary objective is to reduce debt to zero level and create a cash surplus. At the same time, the company wants to pursue a reasonable speed of expansion and is considering building a presence outside of Maharashtra too.

The company is also focusing on brand building and is involved in various marketing initiatives. As compared to its initial years, the company has now started branding and marketing on TV, radio, online and print media along with hoardings. To promote art and culture, the company has set up art galleries in its eight showrooms. This initiative has been undertaken to support budding artists. PNG Sons has had collaborations with costume and jewellery design teams for movies and television serials some of which are Panipat, Bajirao Mastani, Mohenjo Daro, Katyar Kaljat Ghusali, Rama Madhav, Raja Shivchatrapati, Swarajya Rakshak Sambhaji etc.

The company mainly caters to the middle and higher middle-class customer base. Being in the same business for long comes with a huge advantage. PNG Sons has a vast collection of in-house designs and a skillful design team. The combination of unique designs along with the quality gives it a definite edge, when it comes to fulfilling every requirement of its customers. The company has a large traditional and modern collection of jewellery. Many jewellery items are exclusive and pioneered by companies such as Warli and Colorful Mangalsutra. The company has also brought many new trends and introduced collections like temple motifs and contemporary jewellery designs. To connect with the aspirations of customers, PNG Sons has also introduced lightweight, daily wear and designer jewellery collections in gold and diamonds.

In 2019, the PNG Sons won the Best Work Wear Jewellery award from Retail Jeweller India, which is a prestigious recognition in the retail jewellery sector. Apart from this, the company was felicitated in 2018 by India Gold Convention as the fastest growing retail chain in India.

P N Gadgil & Sons Ltd (known as PNG Sons) is a leading jewellery brand with a legacy going back to more than 186 years. The company came into existence in 2012 when the erstwhile P N Gadgil & Co split. PNG Sons is headed by Ajit alias Govind Gadgil and Dr Renu Gadgil, with a professional management headed by CEO-Director Amit Modak. Modak has been working with the group since 1997 and possesses a vast experience in commodities, finance, derivative markets and especially in the jewellery business.

Why should we invest in gold

Silver is shining but..